Learn the origins of that negative self-talk you run in your mind & what you can do about it. 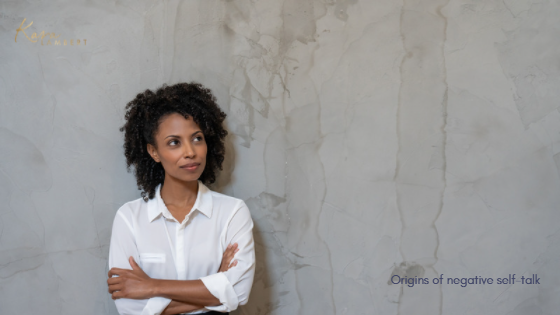 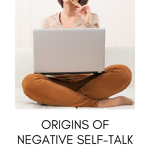 What is negative self-talk?

What do I mean by the “actual things we tell ourselves”? Well, negative self-talk can sound like:

What are the origins of our negative self-talk?

I looked at what Google had to say about the origins of negative self-talk and it was more about what starts the spiral, not how we come to the actual things we tell ourselves.

Like fear and imposter syndrome, negative self-talk is a story we have adopted and adapted for ourselves. It may not necessarily be the words we have heard, it can be the opportunities we missed at the hands of others, or the way we were made to feel.

How do we develop negative self-talk?

I want to demonstrate a few examples of how these stories can be written or adopted.

I am not good enough

Let’s use the first example of “I am not good enough”. In my personal experience, my self-talk around this came from one comment and one situation. The comment, “You don’t deserve to have the level job you have; you haven’t done your time.”. It came from a supervisor when I started as a graduate in the public service. Sure, I hadn’t worked from the ground up, instead, I did my time at university. I didn’t jump the queue; I took a different path. The situation was being repeatedly passed over for promotion opportunities for men who were part of the “club” although I had the same skills and, in some cases, more experience.

Both the comment and the situation meant that I developed “I’m not good enough” self-talk. The comment that I hadn’t done my time insinuated that I didn’t have the skills and didn’t deserve to be there. Being passed over by the boy’s club said that I wasn’t worthy.

What was worse was that every time I lost out, it reinforced my negative self-talk. So, you may not have had the same experiences, but I hope you can now identify where this self-talk may have been generated. 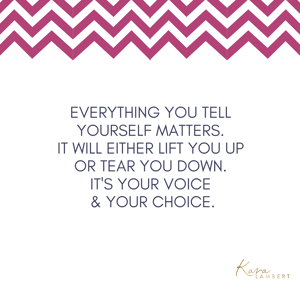 The next example is, “I can’t do it”. Many years ago, a colleague put me forward for a speaking engagement she couldn’t attend. I was to make my first appearance talking at a social media conference about the psychology of Facebook, just after Cambridge Analytica struck. As much as it was my dream gig and I really wanted to be a public speaker, I was deathly afraid of public speaking. I truly believed I couldn’t do it.

The truth, however, was incredibly different. I had been a dancer since the age of 3, so performing was familiar and enjoyable. I had also been involved in debating for a number of my school years, so, public speaking was familiar.

What had happened, was that I had bought into the common belief that public speaking is only feared more than death. I told myself that I should be afraid of public speaking, like many others.

I’ve grouped these two together as I tend to find that they have the same origin – comparison.

In my industry, it’s normal to publish income figures, state that you’re booked out, and generally advertise your financial worth. I began to believe that if I didn’t meet the same targets others had, I was a failure.

As a business owner, we often see coaches marketing how they make their students into 7-figure businesses, make $1 million a month, or nX their business. This marketing preys on our feeling of not being enough and feeds the story that we’re not as lucky or should be better than what we are.

Perhaps we grew up being compared to others, perhaps winning was the only way we received love/attention. Regardless, they feed that feeling that we should be more than we are.

I am not strong/smart enough 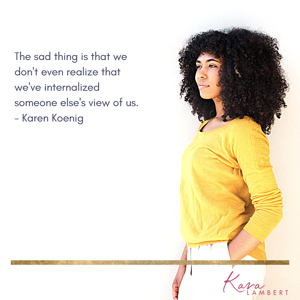 I find that this story can fall into one of two origins – comparison or tall poppy (or both).

Similar to not being lucky or far enough along, not being strong/smart enough can come from the stories we are told about how we rank/compare to others. I was compared to my brother when it came to sport, I was never good enough. (Though conversely, he was never compared with my dancing)

Tall poppy, although the term is synonymously Australian, is a global phenomenon and is best described as malicious peer-to-peer envy. Another way of explaining it is cutting someone down/bursting their bubble so you can feel better. Being on the receiving end of this envy makes one feel like they should not try to achieve or excel because all they will receive in reward is criticism or being attacked.

How to change negative self-talk

The first step in changing a behaviour is to acknowledge that it needs to change. It’s only when you realise and acknowledge that the change will stick. Otherwise, most people see the change as a way to comply with a request on them and it won’t stick.

Then we need to catch ourselves in the negative self-talk. Not always an easy task when it has been an ingrained voice in our heads.

Once we have achieved this, then we can examine the story we are telling ourselves:
– what is it (write it down)
– where has it come from (who told us this, when were we told it, why did we feel this way, what did it stop/protect us from)
– what are the facts behind it (hint: there are seldom any to confirm and many to contradict)
– let’s rewrite the story based on the facts that exist and (mainly) contradict what we had been led to believe.
– replay the new and factual story, especially when you feel the old one creeping back in.

If you’re not sure where this came from or how to fix it, don’t worry, you are not alone. Overcoming the origins of your negative self-talk requires understanding the nature of it and then finding ways to cope with it. This is one of the main reasons why talking with someone is effective; it is all about understanding your thoughts, feelings and behaviours and how they relate to your life. If you are having a hard time, please book a session with me, I’d love to help.

* ”Everyone tells you to stay inside the lines. Colour everything as you see it.”

“May you never be the reason someone gave up on a part of themselves because you were demotivating, non-appreciative, hypercritical, or even worse—sarcastic about it.”