You're getting plenty of potential leads but you don't like following them up. Understand what is behind that & what you can do about it. I fully admit to being bad at following up potential leads. I am trying but to be honest, there’s a number of reasons why I don’t do it. So why don’t business owners do it? What holds them back from the opportunity to turn a qualified lead to a sale?

The story you’re telling yourself about following up potential leads

The most common reason small businesses don’t follow up potential or qualified leads is the story they tell themselves. My story is that I don’t like making calls. Well, that was true for the past, but it has carried over.

There are endless stories behind why we may not follow up leads and for some readers, they may sound absurd, however the story we tell ourselves is often based on lies or other people’s fears/truths that they project onto us.

It is when we understand the truth behind our story and rewrite the inaccuracies in the existing story that we can progress.

Fear of failure and not following up a lead

One of the most common reasons for not following up on a lead is the fear of failure or doing it wrong.

Worst of all is the fear of failing the people who rely on them to successfully convert the lead to a sale.

This is where understanding that following up on a lead doesn’t have to end up with a sale. While a lead remains a lead there is the chance of conversion. We don’t all buy on the first exposure. So why would all leads convert, or not, on the first follow up?

Understanding your conversion rate, and that of your industry can help you rewrite the story you play that says that you will fail at following up and move the story to one of the success you are.

It is a rare person who is happy to hear the word ‘no’. What I want to do is to help you, firstly, understand why ‘no’ is actually a good thing to hear when following up leads. 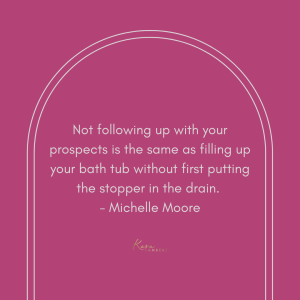 So what happens when you have a fear of rejection (no) and you need to chase leads? Firstly, you’ve done the first step in acknowledging it and from there it’s a matter of rewriting the story for the facts. We have all been told ‘no’ in our lives and it’s up to us how we process it and move through.

When it comes to no, skirting around it in conversations doesn’t help and in fact I find it just makes it hurt more. I find a swift answer is better. Just don’t be the one saying ‘no’ for the lead, because you’re not a mind reader and there is the likelihood that they will be saying ‘yes’.

Fear of success and not following up

Hello dear friend! Oh, the fear of success. My personal nemesis and feeder of my Imposter Syndrome.

I used to believe that success = achieving goals. I was wrong. Here’s a quote I wrote about success:

It’s easier not to follow up a prospective lead than to risk letting them down. Sound familiar? There are three key aspects  to the fear of 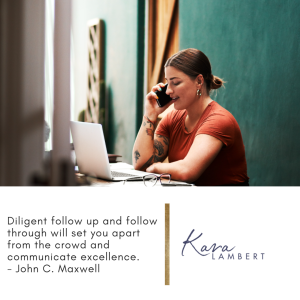 disappointing others:
– perceived expectations
– lack of boundaries/difficulty saying ‘no’
– taking advice from people you don’t want to disappoint but may not have the best insight/knowledge/experience.

The fear of disappointing people can also be linked to people-pleasing and the need to belong. We want people to like us.

Not following up means that there are no expectations being set and that the prospective lead can’t be disappointed.

Business owners who fear disappointing others have a set of perceived expectations that the lead has on them/the business. Understanding that following up a lead is actually a mechanism to understand their expectations and set/reset them, rather than having to meet/exceed them is a way to ensure that leads are followed up.

Remember how I said that following up a lead doesn’t necessarily mean a sale, it can mean growing a relationship?? Yeah, well some of us forget that (yes, me included) and think that a follow-up means closing the sale and that triggers a fear of closing the sale.

When people talk to me about their fear of closing a sale the fear generally stems from one of two places:

The root of these is the same – the story we tell ourselves. Unpack the story and rewrite it based on the facts, not what others have told you or made you believe and then you should be in a better position.

The benefit of not wanting to or liking closing sales and following up on leads is that you don’t have to do this yourself. You can outsource sales. Perhaps that’s a good option to consider.

When you rewrite the story based on the facts you will have a powerful truth. Your truth. Your power. Your worth.  Combine this with understanding that following up on a lead is about furthering a relationship and how the lead will benefit and it is a stronger position on service and one that is no longer driven by ego but by your bigger business purpose.

If you would like to find out more about rewriting your story, you can book a 30 minute free chat to see how I can help you unlock the truth and your worth.