What does science say about being able to stop procrastinating? Read on to find out all the tips. I’ve been looking at why people procrastinate and why it is that they just can’t stop. If you’re a procrastinator, you’ll be surprised at what science has to say about it.

You’re not lazy, you’re not poorly motivated. The real reason you won’t stop procrastinating is that your brain just won’t let you.

Let’s look at what scientists know about the behaviour underlying procrastination. Again, it’s not laziness. There are two main behaviours that drive us to procrastinate: self-control and impulsivity.

Don’t worry, all is not lost, there are ways that you can reduce and even stop procrastinating. Keep reading to understand just what you need to do.

Impulsivity and why you won’t stop procrastinating

What is impulsivity? Zhang, Liu, & Feng (2019) states that “impulsivity is characterized by decreased inhibitory control (Horn, Dolan, Elliott, Deakin, & Woodruff, 2003), intolerance of delay to rewards and quick action without foresight”. As a procrastinator, we’re not as good at “being able to wait” (Diamond, 2012) due to our impulsive nature.

Unfortunately, people who are impulsive tend to report getting more bored and frustrated, so they’re more likely to see a task as being negative.

The promising thing about impulsivity is that Zhang et al showed that when it comes to procrastination, impulsivity can be mediated by self-control.

Self-control and why you won’t stop procrastinating

The issue with procrastinators is that their impulsivity works directly against their self-control. 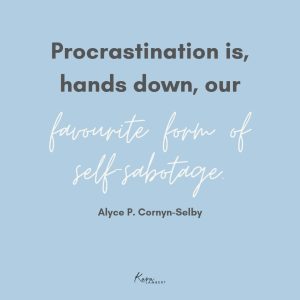 Zhang et al went on to look at other research around self-control and negative emotions. They found that the low and abnormal activity in the PreFrontal Cortex in procrastinators meant that they were likely to have more negative emotions about the task and be unable to change their thinking about what is then seen as a negative task.

Added to this Zhang et al found high levels of activity in the parahippocampal gyrus, a basic part of the brain responsible for remembering similar past activities and using this to ‘see’ future experiences. While these skills have been shown to be incredibly important in high-level thinking skills, to simulate future rewards, and processing emotional stimulus (in this instance the negative task); high activity in this region has been repeatedly shown in procrastination. It’s believed that this overactive region in procrastinators increases thinking about the future, its rewards, and reinforces the negative emotions about the task at hand – all procrastination traits.

How to stop procrastinating

In their research, Zhang et al found a number of studies found that “many procrastinators indeed report that they delayed tasks because of fun distractions (Dewitte & Schouwenburg, 2002; Steel, Svartdal, Thundiyil, & Brothen, 2018).” Many would say that the answer to this is self-control, but there is another option. Avoidance. I know that I procrastinate most when I am working with another person in the same space, heck even my husband working from home in my office is enough. So, I don’t participate in coworking, I avoid it. Some people find social media distracting, I’m one of them, and so we don’t have it on phones, put phones out of reach, don’t have the tabs open on our laptop, or use Pomodoro with social media as a reward. Incidentally, Zhang et al state that “individuals with high scores on the self-control scale were more likely than those with low self-control scores to choose to work in a distraction-free environment (Ent, Baumeister, & Tice, 2015).” So, it seems you can ‘fake’ self-control by removing what distracts you.

We know that procrastinators are great at imagining future rewards, this includes the things that tempt (and distract) them. Researchers have shown that by either making those temptations seem less attractive or by representing them as pictures, rather than events, that we can reduce procrastination.

Studies have also shown that if we believe we will achieve a reward and if that reward will be achieved sooner, rather than later, we are

more motivated. (This is why the Pomodoro technique is so effective)

You may have noticed that I have mentioned negative emotions towards tasks. We will generally prefer to do tasks we enjoy and give pleasure, than those we feel negatively towards. We are capable of changing our thinking towards the task. Mindfulness and other skills (these can be found in my fear toolkit) provide us with skills to change our thinking. While we need to believe the new ways we think about the task, we can certainly objectively look at our negative thoughts and emotions about the task and see if they are real or factual. Most often, our negative thoughts are based on stories we tell ourselves or things we’ve heard and adopted as truth. Ever procrastinated on a task because you believed it was going to be too hard or take too long only to realise that it was either easy or took nowhere near as long as you anticipated? In fact, Zhang et al reviewed research showing that reappraising our emotions towards the task was more effective in stopping procrastination than “sucking up” the emotions. Taking it one step further and focusing on long-term gains and future benefits makes it easier to engage in the task.

If we look a little further into negative emotions and thinking towards a task, Somayeh M, Alireza R, and Mohsen G (2017) showed that teaching positive thinking skills reduced procrastination as participants focused on their abilities and strengths in relation to the task rather than their weaknesses. It seems that we can stop procrastinating if we look for the positive in the task but also the positive in ourselves.

Final thoughts on how you can stop procrastinating

I can honestly say that this took longer to write than I expected. Of course, some of the research I read was irrelevant, some was hard to read. Mostly, I procrastinated because I needed to remind myself that I did indeed have the skills to write this post.

When I spoke with my Mum about this article, she told me that I wasn’t one to procrastinate. I knew I had the skills. I also knew that I needed to give myself space to consolidate my thoughts for each part and to help me simplify the researchers’ language. I thought I was procrastinating, I was but I misinterpreted the space I need to think as procrastination. Idleness isn’t always procrastination, sometimes we do a lot when we seem to be doing nothing.

I also realised that hustle culture and comparison demonises the quiet time we often need as part of being productive. This time is not procrastinating. I believe we need to reconsider how we perceive this time.

This blog, and the research review conducted for it, has shown me that there is a misconception around procrastination. That procrastinators are lazy, lack self-control, and just need to pull their finger out. What’s become clear to me is how pervasive our thoughts about ourselves are and how they make their way into so many of our traits and behaviours, including procrastination.

I want to leave you with this overview on how you can actually stop procrastinating.

– avoid distraction
– change your thinking about what is tempting
– represent rewards and temptations as pictures around you
– set up small rewards sooner for work done on the task
– what are the facts around your emotions towards the task
– focus on the long-term gains and benefits of doing the task
– think about and believe in your abilities
– doing nothing isn’t the same as procrastinating, you can be busy (in thought) and look as if you’re doing nothing