Last year was my first reviewing the Sensis report of Australian Internet and Social Media use. If you have never heard of it, they interview 800 consumers and 1100 businesses. Consumers are equally split by age and gender and proportionate by State. In this report, I want to split the report in two. I first of all want to give you the tools to explain why being on social media is important for marketing and then I want to give you an insight into how Australians use social media and how you can leverage that knowledge in business. These will be written as two separate reports to keep them more manageable for you; feedback from last year was that my report was too long and I want to avoid that. So let’s get on with it!

What does Australian internet and social media use look like? 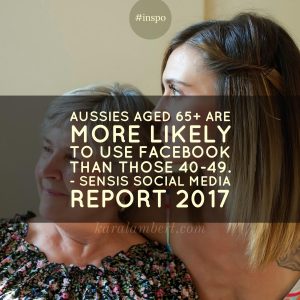 It’s no surprise to those in the industry that Australians are long time early and avid adopters of technology. In the Sensis report, respondents reported that 80% of them owned a smartphone and that 84% of Australians access the internet at least daily and <1% reported never accessing the internet. With 3km to each Aussie (Census 2016), it’s no surprise that there was no significant difference on internet access between Regional and Metropolitan Aussies (81% & 86% respectively).

59% of all people who use social media look at it daily.

Age groups who are most likely to look at social media at least once a day: 18-64

Say what now? What about the 65+ age group? Well, 53% of them NEVER look at social media (yes that included YouTube) and 23% (the next largest proportion of this age group) looked at social media at least once a day.

So what does that mean?

If you’re going to be on social media, be prepared to be posting daily, because your followers are on there AT LEAST once a day.

So what social media do Australians use?

90-99% of all Australian age groups surveyed use Facebook. The lowest group being the 40-49 year olds and the highest the 30-39 year olds. Facebook was by far the most popular social media platform for the over 65s. Here are the top 3 by age group and in descending popularity.

This table is interesting to consider when looking at where to put your efforts depending on the age of your target audience.

It is interesting to compare the data for the top 3 social media platforms by gender:

I find this interesting in so far that there really is little difference in women’s use of YouTube and Instagram and that men are actually more likely to use Instagram than women. Anecdotally business owners tend to believe that women dominate Instagram use, this is not the case.

Further to the high usage of Facebook, respondents were asked about their use of social media messaging services. With the exception of those aged 65+, 78-92% used Facebook Messenger.

So what do these Australian Social Media Use statistics mean for business? 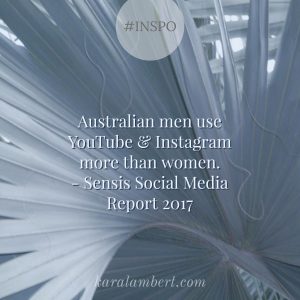 In short, it means that not only can you not ignore having an online presence, if you’re looking to get on social media then you’re best starting with Facebook.

It means that you need to stop worrying that your clients are in regional Australia, because that is actually an advantage for you online. The internet helps them access the world and they love it.

It means that just because your target audience is over 65 doesn’t mean that they’re not online, not using Facebook and not using a smartphone. It’s just not the case – they are.

Next up I look into how Australians use social media and how that can benefit your business. In the meantime, if you want to know more please book a time to chat with me or come over and join the discussion in the free Facebook Group. Need something to take to the boss? Then send them a link to this report and put the following following Infographic on their desk.

What is Facebook Organic Reach and why does it matter?