Ever dream so big, set the goals, put the plan into place only to realise as it’s about to realise that you’re scared witless (or rhymes with) about it actually succeeding. Yeah that’s me. Keep reading or watch this…

Back in February 2016 I heard about Inbound, a major marketing conference in the US. I had just shifted my branding over, redone my website, and I had big plans for my business. “Why not reward myself?”, I thought with a trip. I spoke to friends about different social media & marketing conferences and Inbound came up as the one to attend for those who were already in marketing. So I decided that 2017 would be the year I attended. 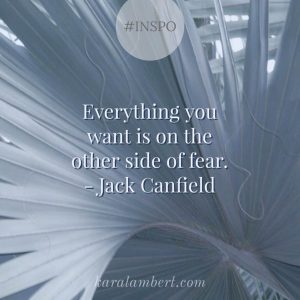 rené Brown) are keynotes. Well, my need to get to Inbound went up a notch. I had to be there. These were bucket list speakers.

I bootstrap my business, meaning there is no capital investment outside of the income it generates. I had to work for those tickets.

Here’s the thing. All along, all through my career, I always thought the only way I would get overseas for work was if my boss paid for me. (Well I did work for the government) Now that never happened and in 3 short years of business, I find myself paying to go overseas.

So why am I so afraid? I’ve even lived in the US. I travelled between Australia & the US alone, so it’s not that. It is precisely what this trip represents.

I have succeeded in achieving a goal I had never had for myself prior to starting my own business and one that seemed improbable.

Yes, I do have an overall fear of success. That’s why all of this is making me anxious just as it’s about to occur. Now don’t worry, I’m not a self-sabotager. I will be getting on that plane and attending that conference.

But what has got me stumped is this fear of success.

For many years I was told not to shine to bright, give others a turn, don’t get too big for my boots. I always thought that this was why I had a fear of success. I thought it was the self-talk tape I had had programmed.  Perhaps a little.

Then I thought it was actually a fear of failure. You know the whole, but what if I fail and fall flat on my face thing! Nope, not that either. While I used to say that failure was familiar, in a self-deprecating manner, and it’s true that I am no stranger to failure. I’m actually ok with failure. I learnt long ago to live without regret, which frees me from fearing failure. I am also incredibly resilient which means that I fail, I get up, I brush myself off, and I get on my way.

So it’s not a fear of failure in the guise of not fearing success.

So what is it about my fear of success?

The paradoxical thing about success, unlike failure, is that it can never truly be achieved. Once you’ve achieved a certain level of success, a new one appears. And I think that’s it. My fear of success is actually that I can never attain it, but don’t confuse it with felling like I will fail, it’s not that. It’s fleeting and surpassed by a new goal. I’m afraid of something I believe doesn’t exist because while I achieve a goal, success has moved. It’s a mirage that jumps along the road of progress to a new point.

So what to do about my fear of success?

Well I’ve acknowledged it and that’s always a good step. 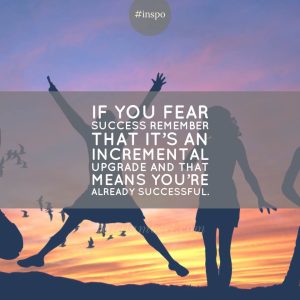 I’ve called it what it is, the never ending fear.

So what does psychology say when overcoming fears, generally it’s exposure therapy. Repeatedly putting yourself in a position to encounter the fear while still in a safe environment. That goes against those things I was told growing up of not showing off.

But I have to lean into my fear of success. Just like getting over a fear of flying (not that I have that, heights yes). I have to work that muscle.

So I’m heading to the US to attend that conference. I’m doing it on my own dollar. I’ve leaned in to success and I’ve actually applied to be a speaker at a conference in Canada in 2018, speaking on consumer behaviour on Facebook.

So what’s my advice to those of you who fear success?

Look at your track record. Look at how far you’ve come. If you fear success, remember it is an incremental upgrade and that means you’re already successful. So lean in, there’s nothing to fear.

How I get clarity in my business