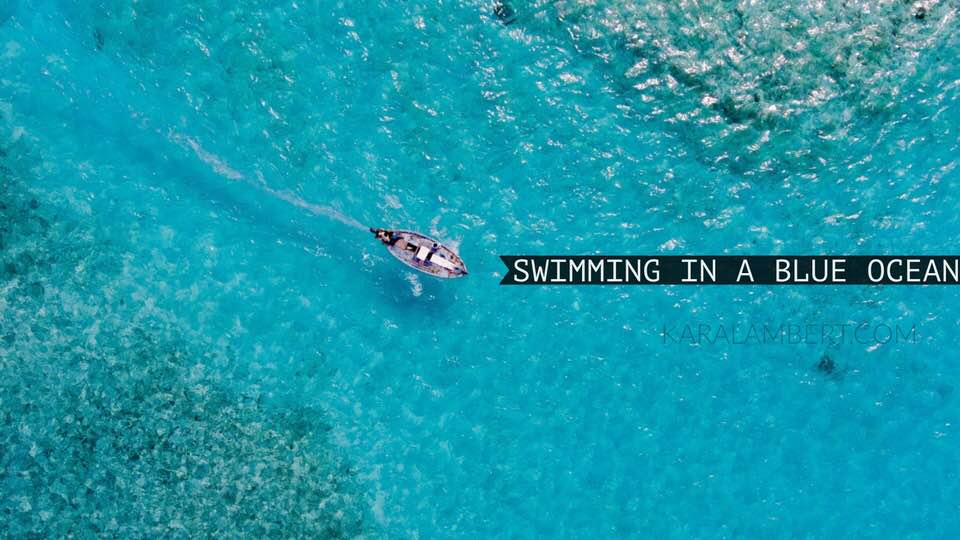 Swimming in a blue ocean

For those familiar with the book “Blue Ocean Strategy” by Kim & Mauborgne, you will know what I’m talking about. For those who haven’t read the book, and I have and it’s a slog, a blue ocean is where you are out in a new marketplace/industry. Think of Uber vs taxis and when self-check in came in on flights vs heading to a counter. It’s revolutionising an industry with a new way of delivering the same outcome. I don’t want to regurgitate the book, what I want to chat about is what it’s like to be swimming in a blue ocean, because that’s where I am.

Back in 2014, or sometime before then, it became clear to me that Facebook had psychologists on staff and that they were using social psychology principles on their platform; and I wrote about it. I wasn’t working as a social media coach or consultant then, in fact I was working as a proof reader but I had my qualifications and I was managing 2 of my own Facebook pages. So the psychology of social media was a side interest. The following year I wrote about it more and by then I’d started coaching on some ideas around how to leveraging how psychology works on social media. 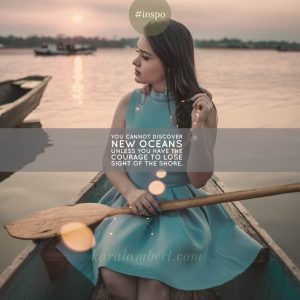 I was full of self-doubt about whether niching myself to the psychology of social media was the right thing to do. I turned to a business coach who told me not to speak about psychology because it would just confuse my followers. Try as I might, I just couldn’t. I had to be genuine and transparent to my audience that this was what sat behind it all. That this wasn’t just some other cock & bull, get rich quick scheme and that it was solid science. So I stayed true to me and told my truth my way.

By the middle of 2016 it was clear to me that I was alone in teaching Facebook this way and I got scared.

I was plagued by comparison-itis, where I constantly checked in with what my competitors were doing. It was awful. It filled me with such self-doubt! They were doing so much more. They had more clients. They were successful and I wasn’t. They were making money and I wasn’t. I sucked! Or so I believed.

I told myself that it was ok, I was a relatively new business and it was just the fact that people didn’t know me and that it takes 7 years for a business to really take off. But my competitors weren’t 7 yet either?! I looked at their messages and saw glaring holes in what they were teaching. I saw the same bad advice being passed around by various coaches. Heck, I even got on a webinar on how to be a social media coach to be told, “all you need to do is follow Social Media Examiner and you can do this”! I was a failure!

I have to be honest, up until 2016, I had a constant internal battle between the pull of having to teach people what I saw about psychological theories being manipulated and used on social media platforms and the need to get a J.O.B to help pay the bills. The pull to expose and teach the truth was too strong and the needs of my family came first. I kept treading water in my blue ocean.

Now I’ve told you that in 2017 I hired a business coach, not the one I mentioned earlier. Now one session I was in tears over this and she told me that I had to let go of the shore to cross the sea. I had to stop looking at competitors, stop worrying that what I was doing was different, stop trying to sell what I think my clients wanted but didn’t align with the path I needed to take in my blue ocean. So I let go and swam, not drifted, deep into my blue ocean. 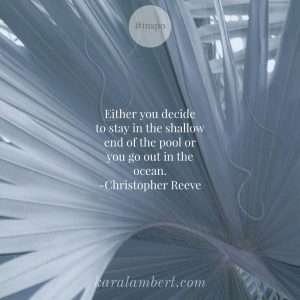 Occasionally I saw a distant boat or shore (customer).

But I was living my blue ocean, true to myself and my message.

Here’s the thing. The blue ocean is exactly this. Nothing worth doing is ever easy! When you’re out sailing, all alone, no landmarks, out in the middle of the ocean, you’ve got to set your course and stick to it.

The other thing to remember and to research is diffusion of innovation theory by E.M. Rogers. The theory sits that until you have at least 16% reach into your marketplace, you will be in the blue ocean. That doesn’t mean that your idea or market isn’t worthwhile, it just means that they’re not ready for you.

You have to be patient and persevere. It pays off. The world will catch up to you or your market saturation will hit 17% and it will start to tip and like a boat with wind in its sails, you will take off.

You will take off, at first it might be a small breeze, but it will make those landmarks close in & that is good. I am taking off, unfortunately it has been as a result of some pretty shocking revelations around Facebook & Cambridge Analytica, all the same I am grateful that these things have opened people‘s eyes to the fact that psychology is part of social media. It has meant that I have needed to speak on how this can be done ethically and I worry that when the majority marketers catch on that there will be a flood of them teaching the psychology of social media without truly understanding the mechanism or more importantly that they are talking about people and not technology. I can see that this will become my new blue ocean, but that’s ok as I’ve now become accustomed to being alone & I’m ok with that.

To hear more about how businesses have succeeded, or failed, because of the law of diffusion of innovation, I suggest watching this video from Simon Sinek. 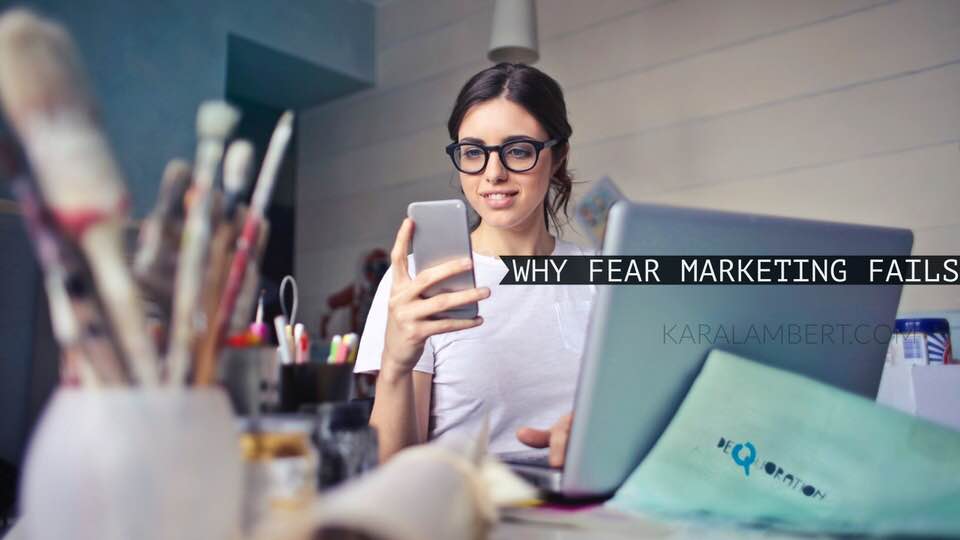 The other day I sat down with a group of business owners and a number of them said to me that they had an issue with marketing to their customers’ fears. They said that they had paid for marketing advice and been told to market to their ideal client’s fears. But they didn’t like it and in fact, they no longer used that advice. Sound familiar.

This is what annoys me. There is so much information out there which we throw by the wayside but believe it to be true because everyone says it. It’s like learning lemmings. (My Mum would say, if everyone jumped off a cliff would you too?) Ok, so that’s a little harsh but it seems like a big waste of money to pay for advice and not use it because you’re not comfortable with it.

Let’s consider a couple of scenarios. 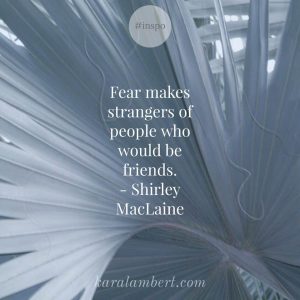 My toaster broke and I am looking to replace it. Will fear help me in my decision? Generally not. It would be things around the colour, cost, shape, size, how many slices, and if it will toast the tops of my crumpets without burning the bottom. (Boy did I make a poor choice on my last toaster)

I’m looking for a business coach to grow my business. Will fear help my decision? Maybe. In the main though I want to know if our personalities match, if they have had past success, and if they coach how I like to learn. (I made a good choice here)

My kids need to see a physiotherapist. (True story and we found a great one) Will fear help my decision? As a parent, I have enough guilt and if someone tries to tap into my Mummy guilt I’m thinking it’s a low blow. I want to know that they can & will treat kids, they are the best in the area, that their expertise meets my child’s needs, and that my health fund will come to the party in some way.

It’s like saying the only way to motivate a donkey is with a stick and forgetting all about the carrot.

Where does fear sit in my stories? They don’t. I’m pretty confident that I’m not unique in these (especially the toaster one) reasons for making a particular choice. I have to be honest, even the fear of missing out (FOMO) is having less of an effect on people as it is more widely used and people realise that it’s generally fake.

So why fear? It is primordial. It drives our fight or flight reaction, triggering some strong neurochemicals (love that adrenaline kick). It’s what we’ve always done.

I want to crush this as I am tired of business owners being told that things are just one way (Ask me what I think about client avatars) and realising that it just doesn’t resonate personally, fit or work for their business. People are not two-dimensional. We are not motivated by our fears alone, just as what we are is not the only way to define us. 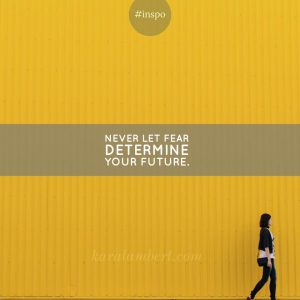 I believe, and teach, that there are five key motivators of human behaviour (on and off line). One of the motivators is fear. Looking into the research, fear is actually a poor motivator. If you use fear to motivate someone, they will comply and follow, they are not making a choice and they are not using their free will. It is also not the way to build trust or grow a relationship. Fear is not an incentive to take action, it’s an incentive not to. Fear is there to keep us safe.

So what I want, if you’ve been told to use fear in your marketing but just can’t seem to do it – I want to applaud you. You’ve made the right decision, to follow your instincts, to listen to your clients, to stick with your values, and to honour yourself. If you’re not there yet and are trying to make it work because you’ve paid for this advice and damn it you will make it work – I give you permission to stop using fear to motivate your clients. If you believe that fear is a great motivator for your clients, I want you to consider how much they trust you and to think about the carrot.

I teach five key motivators to human behaviour. People are multi-faceted and we need to honour that and to meet our clients where they are and not just beat them into submission. If you’d like to learn more, search ‘psychology’ here on the blog or email me at kara@karalambert.com .