Fear of service outsourcing: How to overcome it

How to not feel guilty making big ticket sales

I want to share with you a little personal story about my own Imposter Syndrome and public speaking.

You can keep reading or watch the following video I recorded on it.

So recently, I was invited to travel interstate to speak at a social media conference. Thankfully, for me, I actually I don’t have a fear of public speaking. But that doesn’t mean that I wasn’t caught out by fear. And I wanted to show you that I walked the talk, and how from my experiences, you can learn something that will help you, hopefully, when you’re confronted by fear. So let me go through this. So I was invited to speak. I was travelling on Wednesday speaking on Thursday, travelling home on Friday, comes Tuesday, the day before I was travelling.

And I started to get really anxious.

I couldn’t concentrate on the work that I had to do, I was quite grateful that a lot of clients cancelled their appointments with me, for their own particular reasons, which gave me time probably wasn’t the best thing for me. Because what it meant was that I had time to think, not always the best thing. It got to a point that I started revising and reviewing my slides.

Most of you would probably think that that’s a good thing.

But for me, it’s not you see, I’m speaking about something that I know a lot on. The psychology of social media, and how to tap into the client, your users’ psychology and had leverage that online.

So what happened was, I was reviewing the slides going over them, and the more I went over them, the more nervous I actually got.

Now I could feel that building up inside of myself. And so I realised that I broke the pattern. And I actually took myself off for the rest of the day, I shut up shop, and I went out, I left my desk, I had to do that I had to actually change location. So that’s the first thing that I wanted to get you guys to think about. One, notice how it feels in your body. If, for example, like me, you’re starting to do things over and over again, you’re starting to second guess yourself, and just starting to check and double-check things that normally you wouldn’t do, because you actually know what, then this is a sign that you’re starting to get nervous and fear is starting to take over. And you need to break the pattern and do something else.

That was the first one.

The second one was on Wednesday night.

OMG, They want to talk to me! 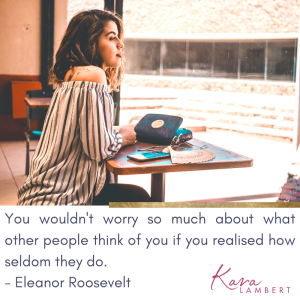 Wednesday night, there was a pre-dinner conference. And what I thought was going to be justice speaker dinner turned out to be a speaker and VIP event, which meant that attendees bought tickets and access to the speakers. I was actually incredibly anxious by this. I was okay with going and meeting all of my speaker colleagues. But having VIP access to me maybe a little bit nervous, it kind of blurred the lines of who stood where.

So, I spoke to a trusted colleague and friend who speaks internationally and speaks on social media. And what he said to me was Kara,  it’s not about you, it’s about them look at it as them buying consulting time.

So here’s the next thing I wanted to tell you about. Get off self, it’s not about you as a speaker, or it’s not about you, as a business owner. It’s about your audience. And when your outreach into them, think of it as a service to them, and not as a way of them accessing you and your product, turn it around.

The next thing was, I actually spoke after Facebook, pretty big shoes, I had to feel. So I was sitting there in the audience watching Facebook speak. And the two women that were speaking for Facebook, they were nailing it, they owned the stage, they were brilliant, captivating, and had everyone’s attention.

And sitting there, I started to feel incredibly nervous that I could not make the grades.

Once again, the problem was, I was making it about myself. So the third lesson, more of a reminder than anything, get off self. Especially when you’re speaking to somebody if you’re doing video even, it’s not about you. It’s about the audience that you’re serving, they don’t deserve your nerves. They’re not here for your nerves are actually here for your knowledge. So it’s not about you and get off self.

The fourth instance that I had, where nerves took over, was at the pre-dinner awards ceremony. The fourth time that nerves took over, and this is only in the space of three days, was at the post-conference awards ceremony. So that was a formal dinner. And I walked in, and I’ve got to be honest, I felt that every face in the room was staring at me, I was set on the head table. Because I’m a brand ambassador. I was also an award judge. So I was given a different position to the awards nominees.

So, I was looking around the room, and people were looking back at me. And I felt that I was being judged. Not for what I was wearing or looked like, but as if I actually even belonged there! “Who was I to be there?”

Later in the evening, ironically, I was announced as one of the brand ambassadors and invited up on stage. And later in the evening, when I’m turn around the room, and I saw people looking at me, they seem to be looking at me differently. Now, the storeys that I had in my mind was at the start of the thing that we’re thinking, “Who is that woman? What is she doing here? I don’t know her? And why is she on the head table?” 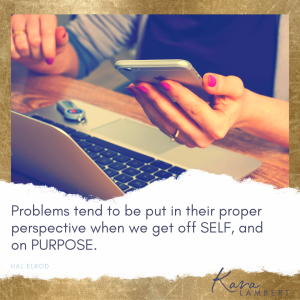 And then after I was announced, I felt like it was more of a story of all I know who you are. And that’s where your place is. “Well done. Kudos to you.”

The fourth lesson I want you to know about fear is that our brain is incredibly clever. It will fill in the gaps of the facts and the knowledge that we have with the storeys that we tell ourselves. I don’t know that those people looking at me at the start of the evening, we’re actually thinking that they could have been looking past me for all I know, they could have been admiring something about me. But my brain filled in the gaps based on my storey and my self-doubt, and went, Kara, they’re judging you. And then afterwards, the story had flipped to power, they know who you are. And they’re looking at you differently.

Remember, your brain is smart, it will fill in the gaps for you with this story that you play. Sometimes that story’s wrong.

What I wanted you to get from this is that I’m not immune to fear, it still creeps up on me.

Yes, I’ve got these four tools in my tool kit. But the only way that I’m able to get them to work is through one additional tool. And that is being mindful. The only reason why I was able to pick up on these points is that I’m able to see the signs and then act on them.

So what I’m encouraging you to do is like me on Tuesday, tapping into how feeling nervous or feeling fear actually feels in your body. And when you feel that, stop, cut the cycle.

If you’re feeling fearful, and you’re about to go and do something for somebody else, stop realise that this fear is actually you putting the focus on yourself, not on them.

And finally, if you’re feeling fearful, or judged or doubting about your own ability, just remember that what you’re doing is filling in the gaps in the story.

I hope this has helped. Let me know in the comments below which of these tips have helped you the most. And if you’ve ever been in a similar circumstance. If you’re looking to talk to someone about overcoming fear, you can book a FREE 30-minute session, to learn these and other tools, right here: https://www.bookme.karalambert.com/