Can I be honest? I get struck by the confidence gremlins. They come and shake me every so often. They whisper the meanest things in my ears. They laugh at me when I feel like I’m starting to get somewhere. They really enjoy pulling me down a peg or two. Now while they are quieter than when I first started my business, it seems they still attack when my defences are down, when there’s a lot going on in my life, when I’ve been sent something from left field – that’s when they creep back in.

These confidence gremlins take on so many forms:
– the imposter gremlin (they’ll see you for the fake you really are)
– the cricket gremlin ( no one wants what you have to offer)
– the comparison gremlin (you’ll never stack up to this other person)
– the undeserving gremlin (you really don’t deserve success)

And these little monsters relish in attacking when you least expect it, heck, I think they lay in wait for 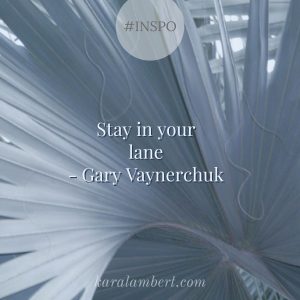 when you’re at the top of your game and then they attack to bring you down to earth.

What’s prompted me to write this is a number of things. It’s coming through a period where I was rattled. It is also looking back on conversations I have had with friends and clients and realising that something just isn’t getting through.

I by no means believe I am the first or am I alone in addressing these gremlins, nor do I think this list is comprehensive. What has become clear is an issue I was unable to see, it often sits at the centre of this.

I believe that we spend far too much energy putting the emphasis in the wrong place.

While speaking with a new coaching client, she mentioned that she was feeling incredibly inadequate because she was looking at others in her industry, seeing how they were succeeding, and wondering why she wasn’t. I told her that I too had been there (and I sometimes slip back) and the only way to stop feeling like this is to stop looking. Stop looking at the Social Media, unfollow them or unfriend them, just don’t put yourself in that position. Why? Because the vast majority of us only put the best achievements out for the world to see, we don’t publicise our struggles, and that gives you an incredibly biased perception of their achievements. (I also learnt that a lot of the success out there is funded by debt and I don’t value success at any cost)

Emphasis on valuing the wrong people

In a recent coaching session, my coach reminded me of some work by Brené Brown. Now Brené is one of my favourite speakers and my favourite speech of hers is the one from 99U – The Man in the Arena. Now Brené did not write that famous speech, but she uses it to demonstrate how we hold ourselves back due to fear (these gremlins).

There is one sentence in this Brené Brown speech which jumped out at me in my discussion with my coach. In the speech she says:

If you’re not in the arena, also getting your arse kicked, I’m not interested in your feedback.

Too often we, me included, give our energy to people who don’t deserve it, not because they are ungrateful or treat us poorly, but because 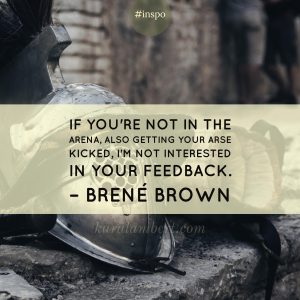 they’re not on the same playing field. Remember, we show people what we want them to see, and that can include family.

So my coach told me of a Brené Brown exercise, where you take a small square of paper, no more than 5 cm², and you write the names of four or five people whose opinions really matter to you. Now some will say that they don’t care what others think of you, that’s not what this is, this is whose opinion you really value. Now I want you to stop and consider the next thing, are they also in the arena? If they’re not also in the arena, are they someone whose opinion should really matter?

Now I was told to keep the list in my purse for when my gremlins came knocking, I actually keep it under my laptop as my gremlins attack when I am online. So I suggest you write your list and keep it where you are often visited by your gremlins. When the gremlins come knocking, look at that piece of paper, is the person delivering the gremlin on the list? There’s a good chance they’re not and so you can discard the gremlin (and maybe even the person).

In the end, I want you to be mindful of where you expend your energy as every misspent piece is a piece you can not use yourself to do what you want to achieve.