One of the most common fears I come across with my small business clients is the fear of failure, technically atychiphobia, and they often refer to it as “doing it wrong”. I’m not convinced that they are afraid of mistakes as much as they are afraid of actually failing. Failing themselves and worst of all failing others.

Most common reasons for atychiphobia in small business owners

Too often the reason that small business owners fear failure is the stories that they tell themselves. They talk themselves into believing they will fail. Some of them are so convincing they actually never even try so they never fail.

Imposter Syndrome is another common cause of atychiphobia. I tend to find they go hand in hand; the feeling that we’re not good enough and that we are likely to fail and afraid of failure.

Imposter Syndrome and the fear of failure

They hate failing themselves and others, even when it’s only the potential of failing what they perceive the expectations are. They fear being caught out for not achieving these expectations that they believe are being set. It goes a little something like this:

I believe I am expected to do xyz I can’t meet these expectations. I’m not meeting them. I’m going to get caught out, I’ve got to work harder. I’m a fraud. I look I can’t even meet their needs. It’s not happening, I’m not going to do it. 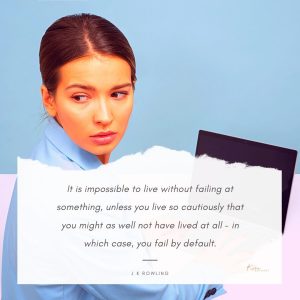 What happens next is a fear of failure and either:

– a need to cover up for not being able to achieve what they believe they should. They say what they believe is expected of this person that they’re delivering the word true. And they downplay their abilities so that they don’t get rejected. Or,
– they keep being working harder and harder hoping that if they keep this person on side, everything will be okay, they won’t be called out. Or,
-they use charm and perceptiveness. They try and win over the support of the other person to avoid that rejection, perceived failure and to ensure they are still liked and accepted.

So what do you do if you manage someone like this, you have a friend like this, or you or your partner is like this and you praise them or receive praise? When the good things come out of that other person’s mouth they don’t believe it because they believe that the other person is being nice or wanting more out of them through sweet talking. They also believe that the person offering the complements doesn’t really know what they’re like.

Results are put back on the other person, no one would be criticised for that and you look like you’re being nice.

The person with the Imposter Syndrome then believes:
– I’ve done a number on them.
– I didn’t achieve the level that I thought I caught short, or they expected me to achieve.
– Yeah, Look, they gave me some great feedback. But realistically, It was nothing.
– And plus, I was just charming them. I didn’t actually mean what I said was trying to keep them on side.
– Until next time.
– Until they actually catch me out.
– Until I fail.

What does the fear of failure do? 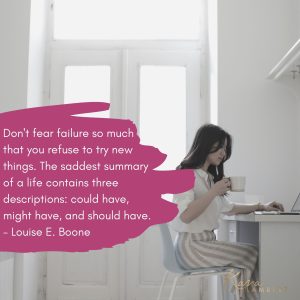 Like Imposter Syndrome, the fear of failure keeps us playing small. It stops us from accepting and acknowledging our skills, our abilities.

In reality, you and your small business stays where it is, or worse goes backwards and proves your fear of failure. All because you couldn’t meet what you perceived were the expectations and didn’t want to be caught out. So you played it safe, made excuses, backed out, and avoided any action to avoid failure. And it worked, of sorts. But then sometimes you feel like the fraud and the failure you fear everyone is seeing you as. And you beat yourself up.

If you find yourself or someone you know in this position, I encourage you to download this free resource I developed for a local University at the start of the COVID-19 pandemic. The group was filled with fear and uncertainty and I took the larger toolkit I use to help clients overcome Imposter Syndrome and distilled it into a group of handy tools. I still use these tools today.

Skills small businesses need to achieve the goal of being driven

How courage is a core skill for small business