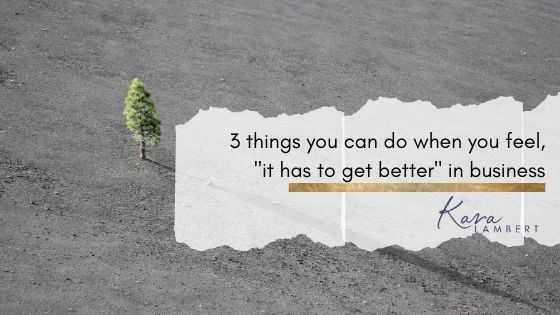 You’ve hit the bottom and now you are hanging on to your belief that it has to get better. It’s the light at the end of the tunnel. Perhaps you’ve had a glimmer of hope through a great conversation, a fab sale, or it’s just that window through to the future where your goals do become your reality. Now what?

It has to get better when you’re clear on things

I don’t mean getting clear on goals. Goals are more like a carrot dangling in front of your nose, nice to lure you along but not so great on keeping you on the straight and narrow.

The biggest changes come in my clients, and myself, when laser-focused and totally in sync with values. Why? Values are our guiding principles, sort of like ethics. If we miss a goal or take a bit longer to achieve them, most of us will be ok. If we are out of sync with our values, we feel down, unmotivated, lost, agitated. Psychologists call it dissonance, but it’s essentially our head and our heart being out of alignment.

For things to get better – live in alignment 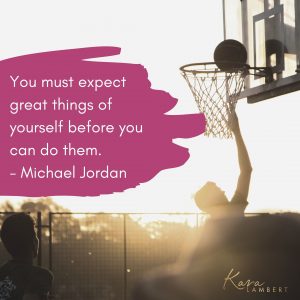 So how well are you in alignment with your values? Do you know what your guiding values are? That one thing that keeps you on track. That one principle you know will get you making the right decision & taking the right action – every time!

Learn more about discovering your guiding values in this free training.

It has to get better when you have time

One of the other things people say to me is that they don’t have enough time. Things will get better when you have more time. We seem to dream up all these business goals we’ll achieve when we have more time. As if it’s some golden bullet. As if it’s something someone will deliver to us. Do I have to be the bearer of bad tidings?

For things to get better – make the time

Bahahahaha, make the time she says! Like I can do that! What if I told you there are a few secrets you can use to make time.

For things to get better – change your thoughts on time

I’m for real & this is one of the biggest game-changers I’ve ever had. I changed my mindset about time. You would know that some times time seems to fly right by and other times it drags. When we feel like there’s never enough time, there isn’t.

Here’s the thing, when I changed my mindset to always believing that I had enough time & then working towards it – I did. Whenever I’m worried that I’ll be late, I take a deep breath and remind myself that I’ll have plenty of time – and I’m on time or early.

I’ve written about this a number of times and you can catch up on how I make it happen by clicking here.

Running your own business can be lonely, especially when no one else in your friends or family run a business. They have no idea! They think that you’re not only raking it in but you’re the luckiest person in the world because you set your own hours and can take long lunches. Shame they don’t see the late nights, endless coffees, and the constant worry as to balancing the bills & the clients.

For things to get better – have someone in your corner 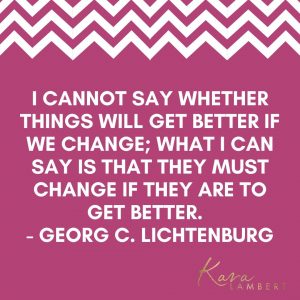 And there I found my tribe! I was no longer alone. In fact, I was surrounded by so many other business owners sick to the eye teeth of explaining why to their partners.

Be ok with saying goodbye, knowing that their time has come and that you have acted in alignment with your values for your greater good.

Then you will know that it has gotten better. 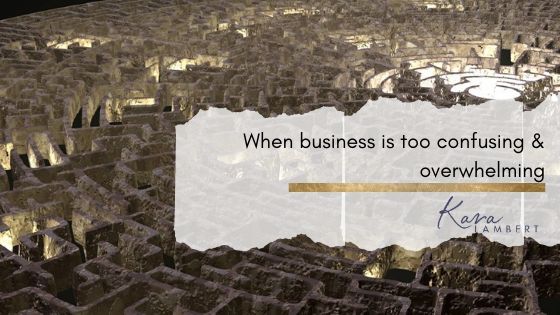 When business feels confusing and you’re in overwhelm

Business is so confusing! You’re choked with overwhelm. What to promote and what to write on social media. How to manage staff & get them to do what you need them to do while keeping them & your customers happy & still turning a profit. Then there’s the laundry list of thoughts streaming through your head, pulling you in different directions. Throw in regular life and it’s no wonder small business owners feel utterly overwhelmed.

As a small business owner, we are all about our industry and our niche. We have that knowledge down. Then we throw in those things we know we should do, like promoting our business and the wheels come off. This is where most people come to me and it goes something like this…

“Kara, I know (insert social media platform name, generally Facebook) is meant to work for me and my business but I have no idea what to write or when to post so that people click & buy; and then I don’t want to spend all day on (insert platform) because then I won’t get the work done that I actually really need to get done. This part of my business is so confusing!”

“Business is so confusing!” And the overwhelm begins…

So, we stop and chat about their ideal client and I throw some numbers around about who’s on which channel and how it differs from the others out there and then they say something like this…

“Kara, but I don’t know what to say! What if I get it wrong? What if they hate me? I’m not good at writing!” 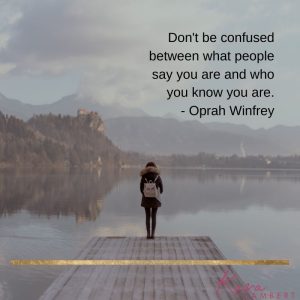 And there it is! The heart of the issue. They don’t trust themselves. They are worried about criticism. They don’t want to blow their own trumpet. They’re afraid of being publicly called out. And I understand.

Ouch! That hurts. And yes, it’s true. 90% of people who come to me with this issue really have a problem with being vulnerable & talking themselves up. Who can blame them! Especially if they’re Australian, and they usually are, and have lived a lifetime of tall poppy syndrome where you’re told not to speak up, brag, or big-note yourself. (Surely, it’s not just me)

Here’s the irony. The solution to what to write and how to stop worrying about what will happen when you do is exactly the same.

The solution when you’re in deep

Please hear me out. 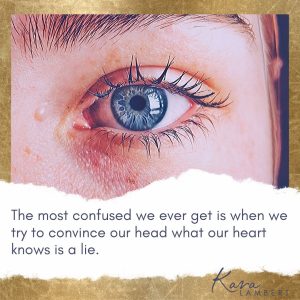 When you’re trying to get someone to do something for you, you really need to understand what will drive them to do it. Yes, even yourself. That’s psychology.

If you’re not sure what I’m talking about, you can access this training video on what drives people and how you can work out what drives you, your staff, and your clients. Best of all it’s free! (Yes, I know free access to good training is one of your drivers) 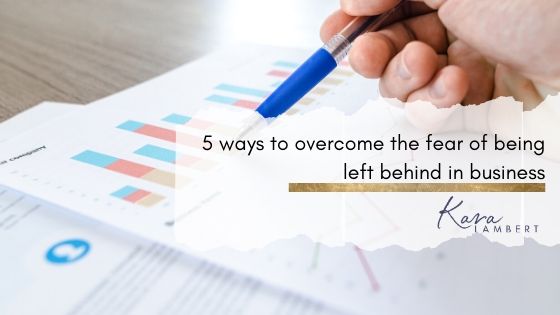 The fear of being left behind is real in business. Business owners are afraid of missing out on the next best thing. Fear that their competitors are going to get the jump on them. Fear of not having a competitive advantage. It’s a competitor FOMO mind storm.

So, what do you do when you’re afraid of being left behind in business?

I admit to being sucked into this for many years. It still bites me occasionally. What are they doing? How come they’re doing so well? What do they have that I don’t? Sound familiar?

It was eating me up inside. The doubt. The second-guessing. The FOMO was real!

There were two main things I did, and do, to stop going down the comparison rabbit hole.

As a business coach, I used to follow a lot of business coaches early on, then one day one of the badass coaches published their profit and loss for the month. Woah! Talk about eye-opening! Whilst their income was massive, their advertising expenses were huge! They were making a tiny profit. That’s when I realized – all is not what you see.

The next realization was that many of the people I saw as competitors don’t have the same family life. They’re single, I’m married. They’re without kids, I have 2 kids. They can work whenever and wherever they liked, I had very limited ability to do this. Time is money & while I learnt to be savvier with my time & time mindset, it just couldn’t replace the difference in responsibilities.

Then I found some coaches who had similar lifestyles and I dug a little below the surface. Another eye-opener. It reminded me of the realization of what my boss had to do when I first entered the public service, ie she sold her soul for her job. A number of the businesswomen who I thought were similar to me, were on a surface demographic, but when it came to our deeper drivers & psychographics we were very different. Our beliefs & values just didn’t align. Again, I was comparing myself to lemons when I was an orange.

I was unique in my field and I had to become ok with that. 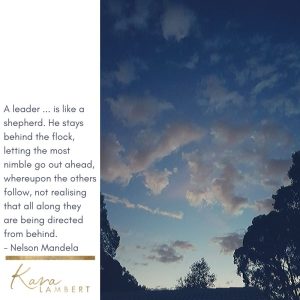 When I realized that I was comparing apples or lemons and oranges, I knew I had to stop.

So what did I do?

I turned off notifications in groups.

Fear of missing out on the next big thing

I admit it, I’m a tech geek & I have worked on the bleeding edge of technology & innovation in Government and it is COOL AF! I get the whole FOMO of missing out of being on the edge & catching the craze. So how have I come off that high?

Will this take me closer to where I need to be?

I had to learn to have dogged focus on my end goal. I had to constantly remind myself that that new shiny object may not be the be-all and end-all. It may not help me get to where I want to be. And…

I had to be OK with that.

Knowing where you’re going and being unapologetic about it helps give you blinkers and keeps you objective.

Don’t get me wrong, I still get FOMO over tech, and I have to look long and hard as to how it will help me – those pitches can be sticky.

Do I really need it? 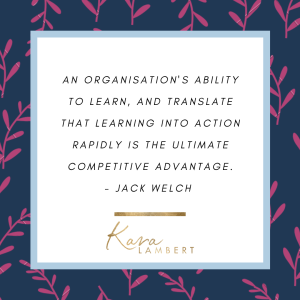 Read some bad reviews to counter your bias

You may just save yourself some time and money in the long run. (I know, I’ve bought some stuff I regret. Just ask me about my microphone set up)

Fear of not having a competitive advantage

OMG, if I see another sale I’m going to scream. It seems like all the major stores are constantly on sale & that can pressure smaller business owners to think that that’s what they need to do to maintain an advantage. Be cheaper.

It’s not about what you want

You might think that your clients just want things cheaper, some do. Or they want stuff yesterday, some do. But seriously, what does your ideal client want? Do you honestly know?

What is their die in a ditch big problem that you fix? Is it saving them money or getting things to them sooner?

Do you know what drives them to action when it comes to what you do?

These are your competitive advantages! You will have a unique set which applies to your business. There’s all the chance that your competitors will be different, even ever so slightly, to your own and that is exactly how it should be.

Now before you claim BS. Just stop for a second and compare the different supermarket chains in your area or the different department or variety stores. They all do the same thing but they all have their competitive advantage that appeals to their ideal client. You & your competitors are no different.

Sometimes the fear of being left behind can also be brought back to central feelings of inadequacy, self-doubt or low self-worth. I can promise you that you can get through that & I’d like to show you how.